Brief overview of the Russian disinformation and information disorder in coverage of the event in the online information space on 23rd and 24th of JuneOn June 14, 2021 two NATO warships, the British HMS Defender and the Dutch frigate Ëverton enter the Black Sea. The entrance of these two ships, exposed the fact that Russia has significant armed forces in the region of Crimea to track the movement of these two vessels and other acitivites in general.On June 23, 2021, the British destroyer HMS Defender sailed out of Odessa and was followed through by a Russian Coast guard ship and a significant number of aircrafts enroute. In such cases, unless the countries have bilateral agreements the Law of the Sea is being implemented and should be observed by all the sides involved in the maritime actions.The Law of the Sea provides that innocent passage can be performed in the coastal waters of any coastal state if it remains within the rules as prescribed by this law. It is evident that the HMS Defender followed all the rules as prescribed by this law which Convention was signed by most of the UN member states including Russia, as part of the UN efforts to make the member states comply with unified rules when using the Sea. During the day of the event the BBC made a video article through its defense correspondent onboard of HMS Defender Jonathan Bil through which in a five-minute video more than few particularities in regards to the passage were mentioned. Most of the points above were duly noted and explained in the video. Mr. Bil also posts questions to the senior officers on deck which unanimously claim that these waters are not Russian and that only Russia considers them as such and that the UK Royal Navy considers the passage as being conducted through Ukrainian waters. The most important points of the BBC video that were not even considered by any of the outlets that distorted the information space in North Macedonia are the following:Since none of these points were made/raised within the articles analyzed, it is to be concluded that the major narrative that was published based on distortion of the facts and neglecting the UK side was that “the HMS Defender provoked the Russian Navy by sailing in the Crimea waters”, which contributes toward imposing a point that “the Russian Navy has all the rights to defend its sovereignty” and that “those waters are in fact Russian waters”.Another interesting finding when analyzing the narratives was the one in which some portals produced identical articles claiming that the Royal Navy was aware that there will be a reaction from the Russian side and that the passage was done on purpose.On the eve of the event the narratives that “the British Government is lying”, and that “the Royal Navy did the passage on purpose” derived from the statement of the Russian MFA spokesperson Zaharova – “Who is lying?”. In her Telegram post Zaharova indicates that there is a clean statement by the BBC reporter that HMS Defender is doing the passage on purpose and that the British Government is lying. The UK side and the explanations provided specifically for this segment of the event were not provided in the NMK media and web-pages. Zaharova post on her Telegram profile is at 17.49 Macedonian Local Time and as of 18.40 the portals in North Macedonia started publishing articles emphasizing the disinformation that “HMS Defender did the passage on purpose in order to provoke Russia”. The portals that published these articles did not referenced Zakharova, still they used the point from her post. The articles neglected once more the fact that the territory is disputed, and that HMS Defender did not violate any international law. Rather than that almost all the portals that published this disinformation went with the narrative that “the BBC correspondent Jonathan Bil confirmed that HMS Defender did the passage on purpose being aware that it may provoke an incident”, which is a distortion and using half-truth to manipulate the public.This distortion also contributes towards glorifying Russia’s Military supremacy and making the issue of the Ukrainian waters and upholding the international laws, i.e. the Law of the Sea, completely irrelevant and not important thus defining this territory as Russian.The FN team analyzed a total of 127 articles that were published on 23rd and 24th of June referring  to the event. The articles were analyzed through the way the event was broadcasted, whether articles observed the stance of both sides, what is the source of the article and if the article clearly pictures the video broadcasted by the BBC. The following statistics are worth mentioning:The labeling of the articles based on the content showed that the Russian disinformation was spotted in 2/3 of the articles while the broadcast of the facts on the UK side was spotted within 28.5% of the articles. Only 5 articles/analyses were labeled as neutral. 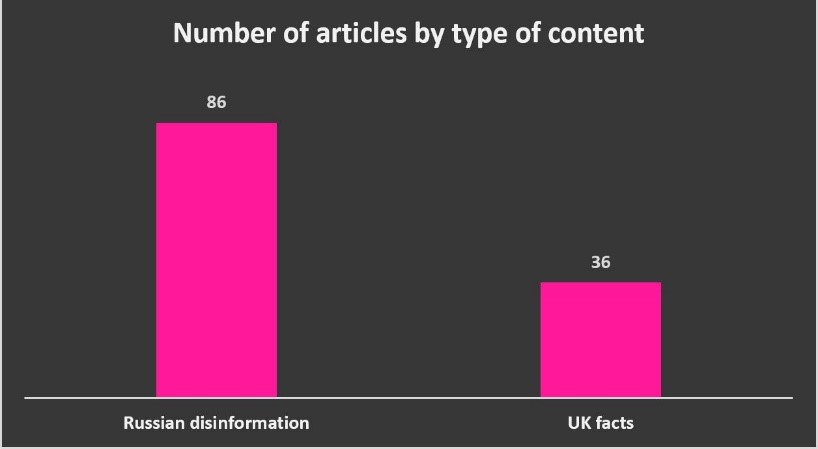 Another interesting finding is the origin of the source i.e. whether it is a Russian or UK/Western source. It appears that a high number of 74 articles or close to 60% were with only Russian sources. Only 24 or 19% were with only UK sources. Sources from both sides (multiple sources) were noted in 24 or 18.9% of the articles. A number of these articles distorted or manipulated the British sources to suit the Russian narrative. 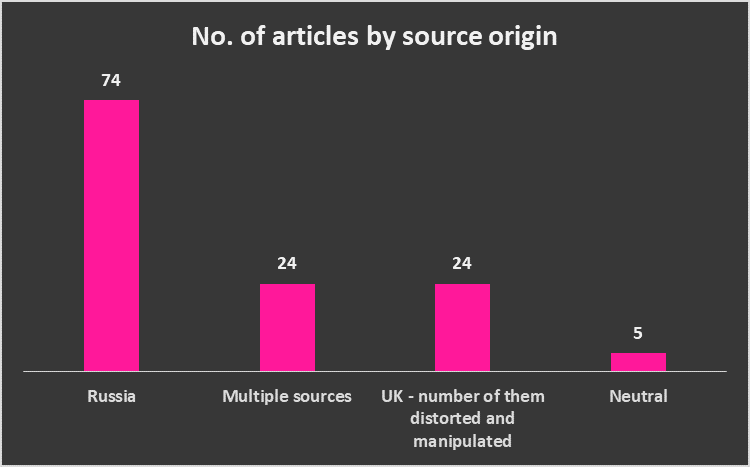 Based on the statistical analyses it can be concluded that the event was broadcasted favoring the Russian side. The Russian sources were dominating the online sphere with TASS and Interfax from the row of media/agencies as well as the statements from various Russian officials. It can also be stated that the statements were offensive toward the West and in some of the cases open threats toward the UK and the Western allies were recorded, which is another argument toward the promotion of the Russian military supremacy. One of the most concerning perspective, which is unfortunately  gain for Russia from this incident, deriving from the way majority of online portals in North Macedonia broadcasted the event was that the issue of the disputed Crimean waters no longer exists, instead it is a matter of who provoked Russia and its sovereignty and how powerful Russia is. Brief overview of the Russian disinformation and information disorder in coverage of the event in the on-line information space during the period 25th to 26th

This project was funded in part through a U.S. Embassy grant. The opinions, findings, and conclusions or recommendations expressed herein are those of the implementers/authors and do not necessarily reflect those of the U.S. Government.